Crestview Exploration Announces Claim Expansion at the Falcon and Divide Properties in Elko County, Nevada, and Reports Historic Results from the Falcon Mine


Calgary, Canada – TheNewswire - November 22, 2022 – Crestview Exploration Inc. (CSE:CRS), (Frankfurt:CE7) (“Crestview” or “the Company”) is pleased to announce a significant expansion of 64 additional unpatented lode mining claims to their claim position in the Tuscarora Mountains of Elko County, Nevada, infilling the gaps between the proximal Rock Creek, Falcon, and Divide properties and bringing the total land position between the three to 260 claims covering an approximate 2,009 hectares or 4,965 acres (see Map 1 below; inset shows previous boundary). 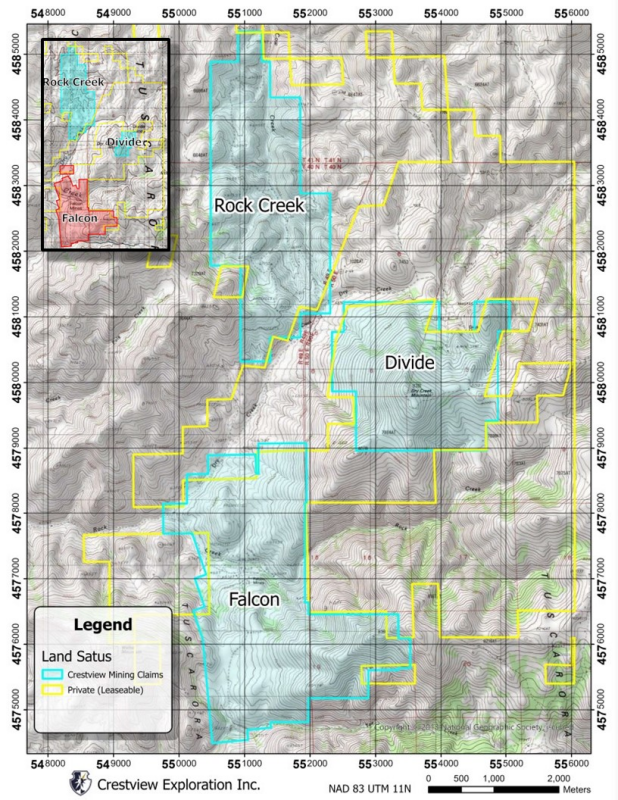 
The company added an additional forty-three claims to the Divide property, primarily expanding the position west closing most of the gap with Rock Creek. An additional twenty-one claims were staked at the Falcon property, primarily expanding to the north and covering all available ground between the Falcon and Rock Creek properties. This land expansion represents a significant step toward consolidating the position, and puts the company in a strong position for making a large discovery.

The Company has also completed an initial review of historic data received as a result of the Falcon property acquisition (News Release dated September 9, 2022) and will be posting the source material to the company website at https://crestviewexploration.com/. The material includes (presumed) ore shipments from the 1930’s (when the mine was active), sampling of the historic workings in the 1960’s and 1970’s, and bulk assays from (presumed) prospect pits. *Note to reader: most of this historic material lacks sufficient context to be interpreted with any level of confidence, and none of the data generated historically was 43-101 compliant as the data predates the practice. Crestview plans to conduct its own sampling program(s) in the coming field season, the first phase of which is designed and ready to commence as soon as conditions permit.

Among this material was a 1979 report outlining an in-depth sampling program within the historic workings of the Falcon mine. The sampling program was described as continuous chip and channel samples, and includes geological and location descriptions. The results include twenty-four of the thirty-three samples measuring greater than 1 opt Ag, fifteen samples greater than 5 opt Ag, and six samples greater than 25 opt Ag. See summary Table 1 of the program below.

VP Exploration Justin Lowe remarked “the Falcon historic material included a lot of intriguing data, but the 1979 sampling program carried out by Ag Au Exploration is especially compelling. The continuous true-width sampling program may be indicative both of the grades associated with the Falcon mine, and that high-grade ore was left in the mine.” 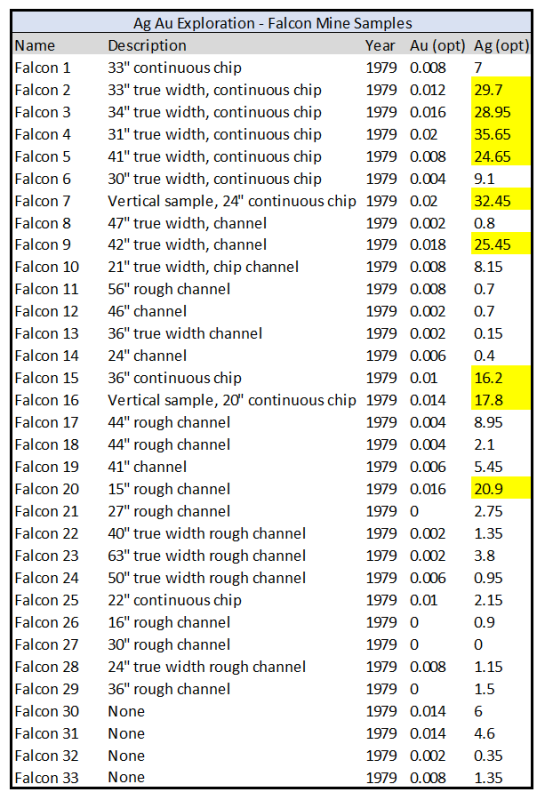 One of the historic assay certificates (Dec. 30th, 1935) included a crude map of the 8 “sample” locations, which appear to be prospect pits outside of and nearby to the Falcon and Scorpion mines. The “samples”  are described as ranging from 5 to 25 tons, and assayed from 20 to 100 opt silver (trace gold). Importantly, these “samples” demonstrate the potential for finding high-grade silver outside of the historic workings.

The samples described above represent highlights from the data; however, the reader is encouraged to view the full suite of inherited assay certificates on the company website. Crestview is eager to follow-up on this data in the coming field season.

Crestview Exploration Inc. CEO, Chris Wensley commented, “We are increasingly optimistic as a result of having received this new historic information which continues to indicate and support the view that a widespread, pervasive, gold and silver mineralized system dominates our prospect area. The Falcon acquisition and recent claim expansion solidifies Crestview’s position in this prospect area and sets the stage for robust exploration and potential significant discovery in the coming seasons, increasing our drive and determination.”

Alan J. Morris is a Qualified Person as defined by NI 43-101 and has reviewed the scientific and technical disclosure included in this news release.

On Behalf of the Board of Directors,

Crestview Exploration is an experienced exploration company focused on the exploration and development of its portfolio of gold and silver properties located in prolific mining districts of Nevada.

Rock Creek gold project is Crestview's flagship asset, with 74 unpatented lode mining claims wholly owned and controlled by CRS. The Rock Creek property was acquired in 2017, and the company went public in 2019. Emboldened by the results coming out of Rock Creek, Crestview strategically expanded on the land position with the acquisition of the nearby Divide Mine prospect in April 2020, and the acquisition of the Falcon silver-gold prospect in September 2022. Between the three properties, all targeting similar mineralization and likely the same hydrothermal system, Crestview now holds 260 total claims in close proximity of one another. These three gold prospects, along with the nearby Castile prospect, are situated in a region with proven "world class" gold deposits (including Midas, Jerritt Canyon, Betze-Post, Meikle, and Gold Quarry), where the potential of finding large, high-grade gold-silver deposits is favourable.

The Cimarron project is located in the San Antonio Mountains of Nye County, Nevada, and is comprised of 31 unpatented lode mining claims, including control of 6 historically producing claims associated with the historic San Antonio mine. The property is located in the prolific Walker-Lane trend, approximately 44 kms south of the "world class" Round Mountain deposit.

This news release includes certain information that may be deemed “forward-looking information” under applicable securities laws. All statements in this release, other than statements of historical facts, that address acquisition of the Property and future work thereon, mineral resource and reserve potential, exploration activities and events or developments that the Company expects is forward-looking information. Although the Company believes the expectations expressed in such statements are based on reasonable assumptions, such statements are not guarantees of future performance and actual results or developments may differ materially from those in the statements. There are certain factors that could cause actual results to differ materially from those in the forward-looking information. These include the results of the Company’s due diligence investigations, market prices, exploration successes, continued availability of capital financing, and general economic, market or business conditions, and those additionally described in the Company’s filings with the Canadian securities authorities.

Investors are cautioned that any such statements are not guarantees of future performance and actual results or developments may differ materially from those projected in the forward-looking information. For more information on the Company, investors are encouraged to review the Company’s public filings at www.sedar.com. The Company disclaims any intention or obligation to update or revise any forward- looking information, whether as a result of new information, future events or otherwise, other than as required by law.