Vancouver, Canada – TheNewswire - November 24, 2022 – Medgold Resources Corp. (TSXV:MED)|(FRA:1XD) (“Medgold” or the “Company”) is pleased to announce that it has entered into a non-binding arm’s length letter of intent dated November 23, 2022 (the “LOI”) to acquire (the “Acquisition”) all of the issued and outstanding common shares of Balkan Metals Corp. (“Balkan Metals”), a private British Columbia company which holds a portfolio of exploration licenses in Serbia, some of which are contiguous to Medgold’s existing Serbian exploration permits. With mineral rights covering close to 1,000 square kilometers, the resulting company will be the largest holder of highly prospective exploration ground in the Republic of Serbia.

To complete the Acquisition, the following steps are intended to be conducted (the “Transactions”):

The Transactions will constitute a “reverse takeover” pursuant to the policies of the TSX Venture Exchange (the “Exchange”) and are subject to receipt of Exchange acceptance and receipt of approval of Medgold Shareholders to be sought at a shareholders’ meeting.

It is anticipated the upon completion of the Transactions, the Company (the “Resulting Issuer”) will have a maximum of 48,005,248 common shares issued and outstanding, of which approximately 58% will be owned by the former Balkan Metals Shareholders.  No finder’s fee is payable with respect to the Acquisition.  The Resulting Issuer will be a “Tier 2 mining company” according to the Exchange’s listing classifications.  A waiver of the sponsorship requirements of the Exchange will be sought.

A Serbian citizen, Dr. Clarici is a co-founder of Balkan Metals Corp. and has over 25 years of mining investment and corporate experience. Dr Clarici has held key management positions with a number of junior explorers, development companies and private equity funds. She is currently Executive Chairman of Pan Pacific Resource Investments, a private venture capital firm focused on energy transition.  Prior to that, she was the Chief Investment Officer at OCIM, a precious metals focused Swiss investment firm.  Before that, Dr. Clarici was responsible for the mining investments of Meridian Equity Partners following her role as portfolio co-manager of the Scipion Mining and Resources Fund.  Dr. Clarici acts as an independent director to a number of private and public international mining companies, most recently with Exchange-listed silver producer, Aya Copper & Silver Corp. (TSXV:AYA).  Dr. Clarici has a PhD in mining and environmental engineering from the Royal School of Mines, Imperial College, London and BEng in Mining Engineering from University of Belgrade.

Mr. Thomsen has had an extensive and highly successful career in mineral exploration spanning more than 40 years in the mining sector, and was formerly the Director of International Exploration at Newmont Mining (TSX:NGT). Before that he held the role of Chief Geologist for Indonesia at Freeport McMoRan (NYSE:FCX) and Exploration Manager at Gold Fields (NYSE:GFI). Mr. Thomsen directed exploration efforts in two of the world’s major mining districts - for Newmont at the Yanacocha, Peru high sulphidation gold district and for Freeport at the Ertsberg-Grasberg Porphyry Cu-Au district in Indonesia. Mr. Thomsen graduated with a BSc in Geology from the University of Wisconsin-Milwaukee and holds an MSc in Geology from Wisconsin-Madison.

Balkan Metals has built its portfolio and its operations with a help of a motivated and efficient team of experienced in-country operators.

Dr. Kozelj has 40 years of experience in Porphyry Cu-Au and massive sulfide deposit exploration. He was the former Managing Director of Rakita Exploration, which became Phelps Dodge and subsequently Freeport McMoRan Serbia. Dr. Kozelj remained the Country Manager and Chief Geologist for Freeport for over 14 years and led exploration programs across Serbia as well as acting as head of project evaluation for Freeport Europe. Dr. Kozelj received the prestigious Thayer Lindsley Award in 2016 at PDAC, for the discovery of the čukaru Peki high-grade Porphyry Cu-Au deposit in Serbia.  Dr. Kozelj has a PhD in Geology from the University of Belgrade.

Mr. Protic is an exploration geologist with over 13 years of experience directing all aspects of mineral exploration with a focus on identifying and developing porphyry Cu-Au and high sulfidation epithermal deposits in the Balkans. He was instrumental in compiling Balkan Metal’s portfolio of Serbia mineral properties. Previously, he was the Regional Geologist for First Quantum Minerals (TSX: FM) as well as Exploration Geologist for Dunav Resources (TSX.V: DNV) and Avala Resources on their sediment hosted gold project in Eastern Serbia. He gained his MSc in Mining and Geology from the University of Belgrade and is a Qualified Person for project and regional geology in Serbia.

Balkan Metals controls over 760 km2 of mineral rights spanning two of the most prospective metallogenic provinces in the “Tethyan Belt” of Serbia:  (1) the Timok Magmatic Complex, host of world class Cu-Au porphyry style deposits, typically Carlin-style sediment-hosted upper zones with so-called porphyry centers beneath; and (2) the Serbo-Macedonian Massif, located to the west of Timok which continues to northern Greece. 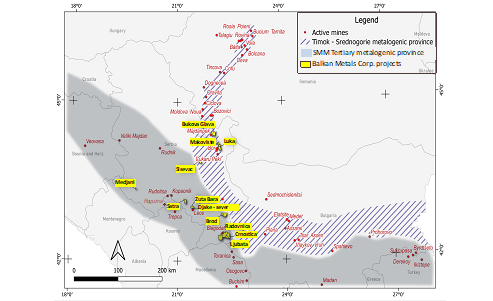 The Luka permit is located close to Zijin’s Bor Mining Complex: 5km northeast of the historic Bor copper mine and 3km from the Veliki Krivelj copper mine.  The Bor Mining Complex is a mature producing operation that comprises two operating mines, the Bor Copper Mine and Cukaru Peki. 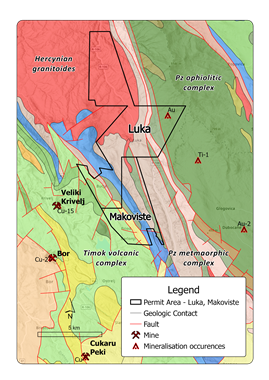 The Makovište permit is contiguous to the Luka permit, to its SSE. Strong Cu -Au anomalism in sampling completed by FQM is noted from ridge and spur samples adjacent to the Luka permit over a strike of approximately 4km long, which remains open.

The Bukova Glava permit is located 5km east of Zijin’s Majdanpek copper open-pit mine, itself part of the Bor Mining complex. Historic soil sampling data show a correlation between Au, Mo, As and Sn of similar character to Majdanpek.  In 2016, results of their extensive regional stream sampling program prompted FQM to stake the Bukova Glava permit on the grounds of its potential for porphyry intrusions similar to Majdanpek.  Balkan Metals is planning to expand detailed geological mapping and grid soil sampling, started in March 2022, as well as geophysics with the objective of identifying potential porphyry intrusions.

The other key terms of the Transaction are as follows:

As required by the policies of the Exchange, trading of Medgold’s common shares has been halted in connection with the announcement of the Acquisition. Trading will remain halted pending the satisfaction of the Exchange’s initial filing requirements in respect of the Transactions and the Exchange’s initial assessment of the Acquisition and related matters. Medgold Shareholders are advised that trading may remain halted until the Exchange provides its final acceptance of the Transactions.

Investors are cautioned that, except as disclosed in the management information circular or filing statement to be prepared in connection with the Transactions, any information released or received with respect to the Transactions may not be accurate or complete and should not be relied upon. Trading in the securities of Medgold should be considered highly speculative.

The TSX Venture Exchange Inc. has in no way passed upon the merits of the proposed Transactions and has neither approved nor disapproved the contents of this press release.

Aleksandar Vučković, MAIG, Exploration Manager for Medgold and Qualified Person as defined by NI 43-101, has reviewed and approved the scientific and technical content of this news release.  Mr.Vučković  is not independent of the Company.

Medgold is a TSX-V listed, gold exploration company targeting early-stage properties in the Balkan region. Run by an experienced management team with a successful track-record of building value in resource companies, Medgold is focused on growth through exploration and resource definition in the prospective and under-explored Balkan region.

Additional information on Medgold can be found on the Company’s website at www.medgoldresources.com and by reviewing the Company’s page on SEDAR at www.sedar.com.

ON BEHALF OF THE BOARD

Certain statements contained in this news release constitute forward-looking information within the meaning of Canadian securities legislation. All statements included herein, other than statements of historical fact, are forward-looking information and include, without limitation, statements regarding the proposed Acquisition transactions and the Resulting Issuer’s plans for the Timok East Project. Often, but not always, this forward-looking information can be identified by the use of words such as “estimate”, “estimates”, “estimated”, “potential”, “open”, “future”, “assumed”, “projected”, “used”, “detailed”, “has been”, “gain”, “upgraded”, “offset”, “limited”, “contained”, “reflecting”, “containing”, “remaining”, “to be”, “periodically”, or statements that events, “could” or “should” occur or be achieved and similar expressions, including negative variations.

Forward-looking information involves known and unknown risks, uncertainties and other factors which may cause the actual results, performance or achievements of Medgold and the Resulting Issuer to be materially different from any results, performance or achievements expressed or implied by forward-looking information. Such uncertainties and factors include, among others, whether the Exchange and Medgold shareholders will approve of the Acquisition and related transactions; whether the Acquisition will be completed as planned; changes in general economic conditions and financial markets; risks associated with the results of exploration and development activities, and the geology, grade and continuity of mineral deposits; unanticipated costs and expenses; and such other risks detailed from time to time in Medgold’s quarterly and annual filings with securities regulators and available under Medgold’s profile on SEDAR at www.sedar.com. Although Medgold has attempted to identify important factors that could cause actual actions, events or results to differ materially from those described in forward-looking information, there may be other factors that cause actions, events or results to differ from those anticipated, estimated or intended.