November 22, 2022 – TheNewswire - Vancouver, British Columbia – Radius Gold Inc. (TSXV:RDU) (“Radius” or the “Company”) is pleased to provide an update on the Company’s exploration activities in Mexico and other regions.

Radius’ Amalia project is in joint venture with Pan American Silver Corp. (PAAS.T).  The 10,250-hectare property includes the Amalia, California and El Cuervo major vein systems which are open at depth and along strike.  Within these systems are multiple targets which are included in Radius' consolidated concessions that extend for more than 10 km of strike length.

Since completion of drilling at El Cuervo in August, geological mapping and surface sampling has further defined and extended drill targets across the property and in particular at the California structure.

Oro Viejo West, located 130m to the west of California, has a discontinuous length of 950m and width between 2m to 15m. Oro Viejo West is hosted in rhyolites and is composed of crystalline quartz veinlets, and silicification with brecciated sectors.  Two kilometres to the northeast of central California, 3 structures called El Cancel, El Cancel SE and Nopalera have been identified.  El Cancel is 650m long by 4m-10m wide, with weak silicification and quartz veining.  El Cancel SE is a hydrothermal breccia 200m long by 3.5m-80m wide, containing fragments of silicified rhyolite in silica matrix. A total of 221 samples have been collected from these structures, with assays pending.

The Amalia project is a large gold-silver epithermal system.  Significant mineralization has been defined at the 3 main targets drilled to date (Amalia, California & El Cuervo).  The targets are open at depth and along strike and many other targets remain to be drill tested. 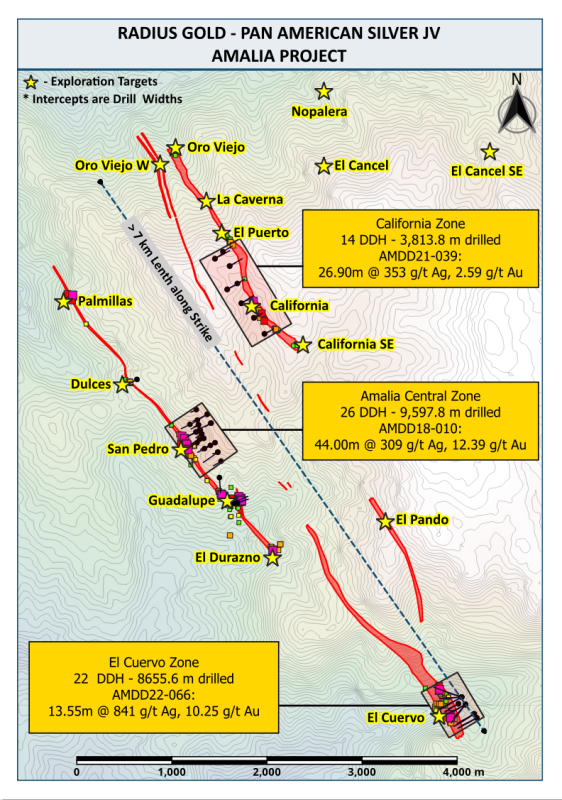 Pursuant to an option agreement signed in June 2018, Pan American Silver Corp. has completed its right to earn an initial 65% interest in the Amalia Project by making cash payments to Radius totalling US$1.5 million (paid) and expending US$2 million on exploration over four years (completed). Pan American may earn an additional 10% by advancing the property to preliminary feasibility.

The Plata Verde project is located in Chihuahua, 100km north of the Amalia project and 50km southeast of the historic Batopilas silver mining district.

Since that time Minera San Julian has funded significant advances on the property:

US$103,600 paid to clear historic back taxes and return the property to full legal compliance.

US$35,400paid in investment costs at the project.

New access agreements have been signed with the local communities, the project camp has been improved, contracts for access road improvements are being finalized.  As well, two senior geologists are on site to commence detailed mapping, sampling and drill targeting for an initial drill program that can commence after completion of the definitive option agreement.

Minera San Julian has the right for nine months to enter into a definitive agreement with Radius for an option to acquire a 70% interest in the Plata Verde project under the following terms:

Radius’ Maricela project is located within a prolifically mineralized mining district, 20km south of the Cananea mine, one of the world's largest open pit copper mines.  The Arizona - Sonora porphyry belt is one of the most important centers of copper mineralization on Earth.  Silvercrest Metals' Las Chispas discovery is located 50km south of Maricela.  Other significant mines near Maricela include: Santa Elena silver gold mine (First Majestic Silver), Nacozari copper mine (Groupo Mexico), Mercedes gold mine (Equinox Gold), and Maria copper mine (Minera Frisco).

At Maricela, geologists have mapped and sampled an epithermal silver and gold mineralized vein system extending approximately 1.5km long by 300m wide, within which occurs multiple veins, stockworks and breccias.  Vein intersections have exposed widths of up to 25 metres.  Radius has collected 576 rock chip samples which returned values from below detection to highs of 12.75 g/t gold and 3,780 g/t silver, as well as various continuous chip sampling across the structures which include highlight intervals of:

Radius’ geological team believes the recent geochemical results demonstrate potential for both high grade silver-gold veins and bulk tonnage lower grade mineralization that could be amenable to open pit mining.  The multiple intersecting mineralized veins at Maricela make for compelling drill targets that have never been tested.  Radius has received drill permits for the property and is currently awaiting final registration of the Company’s option agreement with federal mining authority.

Radius is always evaluating new projects and constantly has teams in the field prospecting and evaluating new targets.  At this time the Company has two geological teams in the field in Mexico working on a new target where prospecting has identified a newly identified volcanic basin with alluvial gold panned from multiple streams and stream sediment samples returning significant results over a wide area. Field teams are working to identify source mineralization.  In Nevada the Company has a geological team evaluating a newly identified large scale altered breccia that appears to host significant gold mineralization. Exploration is always ongoing.

Reported drilling was carried out using by Radius joint venture partners under the supervision of senior geologists to industry accepted standards. Radius’ Qualified Person has visited all Radius’ projects multiple times during the course of the reported drill programs and inspected the drill and sampling operations.  Sample intervals are generally 1-2 m intervals, with half-core samples delivered to internationally certified laboratories.  The samples are fire assayed for Au and are analysed for Ag and multi-elements using method ICP following a four-acid digestion.  Overlimits are analysed using an appropriate method.  Multi-element geochemical standards and blanks are routinely entered into the drill core sample stream to monitor laboratory performance.  Quality control samples submitted were returned within acceptable limits.

Bruce Smith, M.Sc. (Geology), a member of the Australian Institute of Geoscientists, is Radius’ Qualified Person as defined by National Instrument 43-101 - Standards of Disclosure for Mineral Projects.  Mr. Smith has reviewed and approved the technical information contained in this news release.

Radius has a portfolio of projects located in Mexico, United States and Guatemala which it continues to advance, utilizing partnerships where appropriate in order to retain the Company’s strong treasury.  At the same time, management is seeking out additional investment and project acquisition opportunities across the globe.  Radius is a member of the Gold Group of companies, led by Simon Ridgway.

ON BEHALF OF THE BOARD

Neither the TSX Venture Exchange nor the Investment Industry Regulatory Organization of Canada accepts responsibility for the adequacy or accuracy of this release.

Certain statements contained in this news release constitute forward-looking statements within the meaning of Canadian securities legislation. All statements included herein, other than statements of historical fact, are forward- looking statements and include, without limitation, statements about the results of exploration work and future plans at the Company’s projects. Often, but not always, these forward looking statements can be identified by the use of words such as “estimate”, “estimates”, “estimated”, “potential”, “open”, “future”, “assumed”, “projected”, “used”, “detailed”, “has been”, “gain”, “upgraded”, “offset”, “limited”, “contained”, “reflecting”, “containing”, “remaining”, “to be”, “periodically”, or statements that events, “could” or “should” occur or be achieved and similar expressions, including negative variations.

Forward-looking statements involve known and unknown risks, uncertainties and other factors which may cause the actual results, performance or achievements of the Company to be materially different from any results, performance or achievements expressed or implied by forward-looking statements. Such uncertainties and factors include, among others, whether the planned exploration work at the Company’s projects will proceed as intended; changes in general economic conditions and financial markets; the Company or any joint venture partner not having the financial ability to meet its exploration and development goals; risks associated with the results of exploration and development activities, estimation of mineral resources and the geology, grade and continuity of mineral deposits; unanticipated costs and expenses; and such other risks detailed from time to time in the Company’s quarterly and annual filings with securities regulators and available under the Company’s profile on SEDAR at www.sedar.com. Although the Company has attempted to identify important factors that could cause actual actions, events or results to differ materially from those described in forward-looking statements, there may be other factors that cause actions, events or results to differ from those anticipated, estimated or intended.